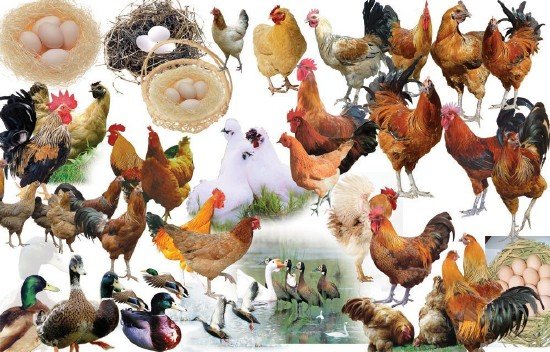 Poultry (/ˌpoʊltriː/) are domesticated birds kept by humans for the eggs they produce, their meat, their feathers, or sometimes as pets. These birds are most typically members of the superorder Galloanserae (fowl), especially the order Galliformes (which includes chickens, quails and turkeys) and the family Anatidae, in order Anseriformes, commonly known as “waterfowl” and including domestic ducks and domestic geese. Poultry also includes other birds that are killed for their meat, such as the young of pigeons (known as squabs) but does not include similar wild birds hunted for sport or food and known as game. The word “poultry” comes from the French/Norman word poule, itself derived from the Latin word pullus, which means small animal.

The domestication of poultry took place several thousand years ago. This may have originally been as a result of people hatching and rearing young birds from eggs collected from the wild, but later involved keeping the birds permanently in captivity. Domesticated chickens may have been used for cockfighting at first and quail kept for their songs, but soon it was realised how useful it was having a captive-bred source of food. Selective breeding for fast growth, egg-laying ability, conformation, plumage and docility took place over the centuries, and modern breeds often look very different from their wild ancestors. Although some birds are still kept in small flocks in extensive systems, most birds available in the market today are reared in intensive commercial enterprises. Poultry is the second most widely eaten type of meat globally and, along with eggs, provides nutritionally beneficial food containing high-quality protein accompanied by a low proportion of fat. All poultry meat should be properly handled and sufficiently cooked in order to reduce the risk of food poisoning. (Wikipedia)