Typically smaller than a main dish, it is often designed to be eaten by hand (with minimal use of cutlery).

“Hors-d’oeuvre” in French means “outside the work”, that is, “not part of the ordinary set of courses in a meal”.‍—‌ The French spelling is the same for singular and plural usage, hors-d’œuvre; in English, the ⟨œ⟩ typographic ligature is usually replaced by the digraph ⟨oe⟩ with the plural commonly written hors-d’oeuvres.

“Appetizer” is a synonym for hors-d’oeuvre.

“Starter” is sometimes used to denote an hors d’oeuvre, sometimes to denote more substantial courses, known in Europe as entrées and in North America as first courses.

A small number of food historians believe that the tradition may have begun in Russia, where small snacks of fish, caviar and meats were common after long travels. However, it may be that the custom originated in China, possibly coming through Steppes, into Russia, Scandinavia, France and other European countries. The tradition may have reached Italy, Greece and the Balkan nations through Russia or Persia. Many national customs are related, including the Swedish smörgåsbord, Russian zokuska and Italian antipasto. During the Roman Period the meal practice was to have two main courses which were supplemented before the meal with small amounts of fish, vegetables, cheeses, olives and even stuffed dormice. These would be served at the start of the meal known as either gutatio or promulsis. The Greeks called the appetizer course propoma.

During the Middle Ages French meals were served with entremets between the serving of plates. These secondary dishes could be either actual food dishes, or elaborate displays and even dramatic or musical presentations. In the 14th century recipes for entremets were mostly made with meat, fish, pork and vegetables. By the 15th century the elaborate display and performances were served up between each course and could be edible or displays of subjects relevant to the host, created in butter sculpture or other types of crafted work. With the introduction in the 17th century of Service à la française, where all the dishes are laid out at once in very rigid symmetrical fashion, entremets began to change in meaning but were still mainly savoury. Along with this came elaborate silver and ceramic table displays as well as Pièce montée. The entremets were placed between the other dishes within the main work of the meal.

At about this time in the 17th century smaller dishes began to be served by being placed outside the main work of symmetrically placed dishes. These were known as hors d’oeuvre. Hors d’oeuvres were originally served as a canapé of small toasted bread with a savoury topping before a meal. The first mention of the food item was by François Massialot in 1691, mentioned in his book: Le cuisinier roial et bourgeois (The Royal and Bourgeois Cook) and explained as “Certain dishes served in addition to those one might expect in the normal composition of the feast”. In the French publication Le plaisirs de la table, Edouard Nignon stated that hors-d’oeuvre originated in Asia. He went on to state that the French considered hors-d’oeuvres to be superfluous to a well cooked meal. Service à la française continued in Europe until the early 19th century. After the 19th century the entremet would become almost exclusively a sweet dish or desert with the British custom of the “savoury” being the only remaining tradition of the savoury entremet.

The style of formal dining changed drastically in the 19th century becoming successive courses served one after the other, over period time. Some traditional hors d’oeuvres would remain on the table throughout the meal. These included olives, nuts, celery and radishes. The changing, contemporary hors d’oeuvre, sometimes called “dainty dishes” became more complicated in preparation. The use of pastries with meat and cream sauces among other elaborate items, had become a course served after the soup.

Food in England is heavily influenced by other countries due to the island nation’s dependence on importing outside goods and sometimes, inspiration. Many English culinary words and customs have been directly borrowed from the original French (some completely Anglicized in spelling) such as: cruisine, sirloin, pastry and omelette which came from the 18th century and earlier. In the late 19th and early 20th century, even more words, foods and customs from culinary France made their way into England, such as the éclair, casserole, à la carte, rôtisserie and hors d’oeuvre.

The custom of the savoury course is of British origin and comes towards the end of the meal, before desert or sweets or even after the desert, in contrast to the hors d’oeuvre which is served before the meal. The British favored the savoury course as a palate cleanser before drinking after the meal, which made the hors d’oeuvre before the meal unnecessary. The savoury is generally small, well spiced and often served hot, requiring cooking just before serving. In the Victorian and Edwardian periods, savouries included such toppings as fried oysters wrapped in bacon, and Scotch woodcock, which was a savoury made of scrambled eggs, cayenne pepper and Gentleman’s Relish on buttered toast, served hot. In France, cheese was often part of the savoury course or added with simple fruit as a desert. A typical Edwardian dinner might consist of up to four courses that include two soups, two types of fish, two meats, ending with several savouries then sweets. 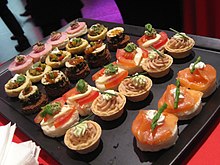 A tray of hors-d’oeuvre at a cocktail party

The term appetizer is a synonym for hors d’oeuvre. It was first used in the United States and England simultaneously in 1860. Americans also use the term to define the first of three courses in a meal that was optional and generally set on the table before guests were seated. Drinks before dinner began to become a custom towards the end of the 19th century. As this new fashion caught on, the British took inspiration from the French to begin serving hors d’oeuvre before dinner. A cocktail party is considered a small gathering with mixed drinks and light snacks. Hors-d’oeuvres may be served as the only food offering at cocktail parties and receptions, whereby no dinner is served afterward. After the end of prohibition in the United States, the cocktail party gained acceptance. Prior to the first world war, American dinner guests would be expected to enter the dining without delay where drinks would be served at the table with appetizers. This changed by the 1920s when hors d’oeuvres were served prior to a non alcoholic cocktail however, after the repeal of Prohibition in the United States cocktail parties became popular with many different hors d’oeuvres meant as something to help counter the stronger drinks. It is the cocktail party that helped transfer the hors d’oeuvre from the formal dining table to the mobility of the serving tray. These appetizers, passed around the cocktail party may also be referred to as canapés. (Wikipedia)